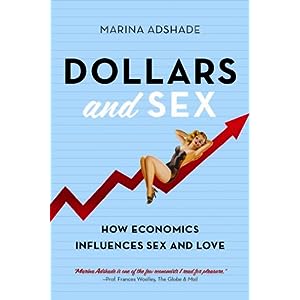 The title may give the false impression that this non-fiction work only addresses relationships in terms of exchange of money (it does discuss the topic of prostitution), but this Freakonomics-style book actually attempts to explain how we choose our dating, marriage, and sex partners through the rubric of supply and demand.

In one chapter, armed with data provided by an online dating website, the author analyzes how users choose the partners they do.  What is the influence of race? income? height? beauty?  How do some users sabotage their own chances?

This is a very fast-paced book, with clear and concise summaries of the relevant research, presented in a page-turning fashion, reminiscent of Malcolm Gladwell’s style.  I appreciate that the author was careful to describe the research in such a way that did not distort the findings (eg. the author never makes sloppy conclusions, like mistaking correlation for causation).  My only complaint is that the pace is so fast that I need a second read to fully digest all the interesting facts.

I have a pretty open mind when it comes to popular fiction, so I decided to check out this book.  Not really a review, I’ll just write my thoughts as I go.  I’ll try to keep spoilers to a minimum for anyone who hasn’t read it.  I don’t think it’s a spoiler to say that this novel contains pornographic smut, though.  That’s something you should be aware of if you are thinking of picking it up. (Edit: In retrospect, it occurs to me that not everyone will agree with my interpretation of what is and what isn’t a spoiler regarding the events in this story; therefore, be warned.)

So far, I can’t say I’m that impressed with the love interest, title character Christian Grey.  Besides his minimal personality traits of being controlling and mysterious, he’s kinda creepy, isn’t he?  Kinda reminds me of Christian Bale’s Patrick Bateman character from AMERICAN PSYCHO.  Even in the early scene in the hardware store, I could tell what he was getting at with his purchases, and I thought it was creepy.  I mean, he and Anastasia hardly know each other, and here he is stalking her and vaguely suggesting that he’s thinking about her sexually.  The only thing that makes it okay is that he’s so freaking hot and she happens to be attracted to him too.  Had he not been so hot, it would have just been gross, and creepy.

As it is, she doesn’t really know much about him, other than that he’s so hot.  This being a book, I just have to literally take the author’s word for it that he’s so hot that nothing else matters, and I’m frankly not that convinced.  Actually, neither of the characters has much personality so far.  It seems like any chemistry they have is purely physical.

It isn’t all bad, though.  Aside from some overused plot devices that I see in anime twice a week, it’s been an easy read and there have certainly been some amusing parts.

Well, I’m relieved to see that Anastasia is asserting herself a little bit now.  I also like how her subconscious sometimes calls her a “ho”.  It appears that she does have some self-awareness about her situation and she’s wondering if a physical-only relationship can really be enough.

Hmm, it looks like she’s going to accept the contract that’s going to sign her freedom and self-respect away.  I was hoping she would reject it.  Force him to play by her rules.  After all, the conceit is supposed to be that she believes (and he believes) that he’s not capable of love, and so this contract is the only way she can be with him.  But already I don’t buy it; there has been plenty of evidence to the contrary.

In previous chapters, they touched on “creepy” and “stalker”.  Now there’s finally some mention of “love”.  Otherwise, not much development here.

Chapters 25 to 26 and final impressions

Anastasia makes her decision and it happens pretty suddenly.  Well, as anyone knows, it’s not really the end.  There are two more books, and their blurbs seem to give a lot away, actually.

Apparently, some readers have complained about the author’s limited vocabulary.  That didn’t really bother me.  I didn’t expect, or want, this kind of book to be high art.  If I have any criticism, it’s with the dialogue; some of the words/phrases that the characters spoke didn’t sound that natural to me, not American enough, maybe?  Just reading it (as opposed to hearing it) wasn’t too bad, though.

I picked up this manga almost on impulse. I had some money on a gift card that I wanted to use up. The art looked pretty and dark. And, the whole series is only two volumes long, so it fit my budget nicely.

Zen, our main character, is an amnesiac, cold-blooded killer who reluctantly ends up investigating the mysteries of his past. Be prepared to leave your moral expectations at the door before reading these books, because there’s a lot of senseless violence perpetrated by the “good guy”.

It turns out the first chapter is its own stand-alone story, then the rest, chapters 2 to 8, represents the main story.

The protagonist of this first tale, Russo, bears some physical resemblance to Takumi from NANA, with lighter-colour hair. I remember Nana (Hachi) used to say that Takumi might have become a yakuza if he hadn’t found an outlet in music.

Volume one (chapters 2 to 4) – brief impression

The main story starts here and it’s somewhat milder than the first chapter. There’s less violence and the relationships between the characters are a bit more predictable. The artwork continues to be attractive, despite some instances of shrunken head.

The main characters spend much of chapter 4 in military uniform, so that’s some nice fanservice right there.

Good, focused, plot developments. Some of the translation work seems a little weak, making some lines difficult to understand within the narrative. Also, Zen apparently hasn’t lost the “last 20 years” of his memory, since he can remember back almost 10 years! Don’t know if that one’s the fault of the author or the translator.

As before, all of the characters are attractive, even the bad guys. Of course, once you get familiar with this manga, you’ll know that there are very few non-villian characters to be found.

Fairly satisfactory ending, though there could have been more story still. I felt some of the deaths were a bit unnecessary and illogical; even though I originally expected an even higher body count after that first bloody chapter.

BLANK SLATE would probably make a good anime. There’s enough material for 12 or 13 episodes, maybe with room for quality “filler” like chapter 1.