EVA 3.0 is the third of a proposed 4-film reinterpretation of the classic Neon Genesis Evangelion anime series. I have not seen the original series. However, I have watched the first 2 films and I can’t honestly say I’m a fan of the franchise. I don’t recall feeling anything for the characters and I didn’t find the mecha action to be that engaging either. The inclusion of fanservice was jarring and contributed to my lack of enjoyment of those earlier films. Strangely, EVA 3.0 doesn’t really build on the plot of its predecessors; but if it does anything right, it’s by scaling back the fanservice a lot and substituting BL undertones instead.

On several occasions, the audience broke out laughing at the (presumably) unintentional humour of the budding bromantic relationship between Shinji and Kaworu. That was actually the best part of the whole movie. Not just because it was funny (it was), or that I’m into BL (I’m not, really), but because that was the one part that actually was easy to understand. Having lost the life he knew, it made sense that Shinji would want a friend that he could hang out with and confide in.

A big chunk of the action happens right at the start of the film. Visually, it was nice enough, but beyond the general gist, I found it hard to follow what was going on. Actually, regarding the animation as a whole, the CG looked good, and the cel animation looked more than good, but I felt they didn’t mesh together that well.

In an even bigger chunk of the movie, Shinji mopes around by himself, pondering his existence.

Even though the screening was very late at night, it did hold my attention, surprisingly. I can’t really say, though, that the plot made a lick of sense to me or that I recommend the film to anyone. 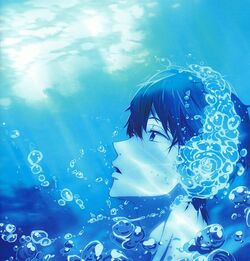