I guess vampire films really are more my thing…

At the end of Breaking Dawn part 1, Bella and Edward’s half-human/half-vampire daughter, Renesmee, was born; and Bella finally joined the ranks of the undead.  Now, the Volturi become aware of Renesmee’s existence and suspect her of being an abomination.  That’s all the provocation they need to target the Cullens for attack.

At this late stage in the overall plot, there’s not much emphasis on the romance anymore.  Sure, there’s a love scene, but this is hardly a kissing story.  Instead, the focus is on the impending Volturi threat and the Cullen family’s efforts to avoid a war.

If you’re looking for action, there’s plenty to be had.  Lots of decapitations too!  Also some humour.

Basically, if you’ve watched and enjoyed the previous four Twilight films, there’s no reason you won’t like this final installment.  It really does provide a memorable and satisfying conclusion to the saga.

Actually, I agree with all the facts in Joanna’s review:  yes, this is a very talky film that looks a lot like a stage play.  I had to concentrate really hard to understand the political maneuvering that was going on, and I still didn’t figure out what were the priorities of some of the different stakeholders.

But still, I like documentaries and I liked learning about the politics behind the Civil War and the anti-slavery movement.  After watching the movie I spent a lot of time on Wikipedia reading more on the subject.

So yeah, I agree with Take 1 in all the particulars, but I just enjoyed this film more than Joanna because it was more up my alley.

This is the story of Abraham Lincoln during the Civil War, and his quest to enact the 13th Amendment to abolish slavery in the United States of America.  For the first time in maybe ages, Alice and I have gone to the cinema and seen the same movie together.  Therefore, expect to see two reviews of this film.

At the risk of expressing an unpopular opinion and revealing my ignorance and/or irreverence of American history, here are my thoughts.

The movie was talky.

I would have really liked to have seen more explanation of Lincoln’s thoughts and motives. There was only one brief scene about his past and how he was appalled at seeing slaves as a young man.  And incidentally, it could have very easily been shown as a flashback, but in a film that’s so resolutely verbose, it was all tell.

Much of the dialogue was intricately crafted, almost poetic, and I imagine it’s possible to get a lot out of it if you paid attention carefully.  That being said, there were a few lines at the other end of the spectrum too.

For example, toward the end, when decision day was drawing near, Lincoln instructed his men to procure the remaining number of votes needed to pass the amendment.  When his subordinate asked, “But how?”, Lincoln’s reply was something to the effect of, “I’m the President of the United States of America!  Just make it happen!”  And I don’t know… I’ve always thought of Abraham Lincoln as an admirable and forward-thinking leader, but that just sounded to me somewhat more arrogant than inspiring.

On the plus side, LINCOLN provided an excellent showcase for great actors to show off their acting chops.  Certainly the acting was stellar, and that’s a must for delivering wordy lines in such a dry, stage-play-like setting.  Unfortunately, I can’t say I found the movie to be terribly entertaining.  It was very much like a high-budget documentary, and it may have actually benefitted from a little artistic embellishment.  I’m not suggesting that Abe should have taken out his silver axe and started hunting vampires, but there must’ve been some middle ground that could have been explored. 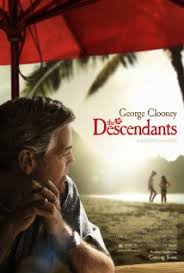 George Clooney stars as a man dealing with the imminent death of his wife, trying to reconnect with his two young daughters and make peace with the the shortcomings of his marriage.

Featuring a thoughtful script which slowly reveals the true (and somewhat surprising) natures of each of the main characters, the film starts off with a refreshingly unsentimental depiction of a family dealing with loss, but by the end, earns its emotional final scene.

I think this film deserves to be called “inspired” (which would earn it 3.5 stars) but on the other hand, I don’t think it’s amazing or inventive enough that I would want to re-watch it (which means it only rates 3 stars).  Maybe I will have to start using an intermediate 3.25 star rating after all.

A single mother with limited financial and social resources struggles to care for her family.  All the while, she has to protect the family secret, that her two young children are part-wolf.  Early in the film, we see her facing the challenge of finding a suitable environment to raise her son and daughter in.

As they grow older, the kids must come to terms with their unusual situation and find their paths in life.  And their mother finds herself torn between wanting to protect them and allowing them to make their own decisions, their own mistakes.

Despite the element of fantasy, WOLF CHILDREN tells a realistic story that any family can relate to.  The animation is excellent, as expected.  One highlight for me:  the kids were actually really adorable, especially Yuki.  She was rambunctious, and she had a loud and cute voice to match.

3.25 stars (out of 4)  Quality-wise, I think it’s considerably better than a standard 3 rating, but it’s not the sort of film that I’d feel inclined to watch again, so it doesn’t quite make a 3.5.

Add:  I just watched this film and entirely agree with you! – Bini

Joe works as a looper, that is, a hitman for the future mafia.  They send their hits back in time to be offed so the bodies will never be found.  Eventually, Joe has to take out his future self (to complete the loop).

Looper is an enjoyable time-travel action-adventure film.  It doesn’t stand up to any kind of logical scrutiny, but that’s a given for any time-travel story.  Taken as a fun ride, it’s just fine.

I’ll just comment that the one scene where the main character’s girlfriend is topless adds nothing to the movie.  Worse, it’s awkward and not even sexy.  That’s just bad fanservice.  The poor actress had to take her clothes off for nothing!  In contrast, the love scene later in the film manages to be more sexy, even though the characters remain fully clothed.