After seeing how having children has strained the marriages of their friends, platonic friends Julie and Jason decide to have a baby together first and then continue looking for their respective future spouses after.

The first half of the movie was quite amusing with witty banter between the likable leads, but the second half degenerated into predictable rom-com territory. 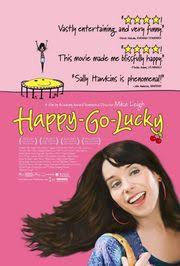 Essentially a character study of a cheerful, single, British schoolteacher as she encounters various situations/characters which test her mettle.  Not a whole lot happens in this movie, but the main character does have an interesting and unique take on life.  Directed by Mike Leigh.

Kirito fights another guy over Asuna.  This time, it’s the leader of her guild, Heathcliff.  Heathcliff wins and Kirito joins the guild.  He even has to wear their not-black uniform.  But there’s a traitor in their midst (the bodyguard guy who fought Kirito over Asuna in the earlier episode), and he’s trying to kill Kirito.  Asuna and Kirito take him down.  Kirito and Asuna take time off, get married, pick up a stray kid.  Mindnumbing.

Said stray kid, Yui, dies in episode 12, but not before giving Kirito some interesting information about Sword Art Online’s program.  Her grieving “parents” manage to save her core data before she’s fully deleted, and hope to re-create her later.

Kirito goes fishing.  Then Kirito and Asuna get summoned to a big boss battle.  After the battle, Kirito takes a chance and figures out the in-game identity of SAO’s mastermind.  They fight.  Kirito and Asuna die.  Except they don’t die.  Of course.

Although there are plenty, plenty of things I could gripe about, in all fairness, these 2 episodes are not bad.  There’s fighting!  There’s action!  Things happen!  Best of all, Sword Art Online ends!  Well, at least the game is over.

Regrettably, SWORD ART ONLINE, the anime, is not over.

Now, we’re being introduced to an extreme one-dimensional villain as a romantic rival for Kirito (I laughed at the stupidity).  First, there’s the absurdity that they are fighting over who gets to marry a comatose girl.  Then, Asuna X Kirito is already so well established that I don’t think there’s any risk that anyone would root for the other guy, even if he was flawless; there’s just no need to make him such an unbelievable dick.  I guess I should give the character designers some credit for making his appearance not completely butt-ugly.

But that’s not all.  It turns out Kirito’s own sister is in love with him (I facepalmed so hard).  The show goes to great lengths to emphasize that they are actually cousins, not brother and sister.  Of course.

Lately, it seems as if there’s one or two new imouto/onii-ai (ie, incest) anime series every season.  God knows why.  Anyway, SAO wasn’t shitty enough already, it had to get on the imouto-fetish bandwagon too.

I won’t be watching this anymore.  Stick a fork in me; I’m done.

I actually watched this movie about a year ago, but recently re-watched it and thought I would post a rating on it since my recent reviews have been so uniformly negative.

Emma Stone is winning and full of personality in this perfect vehicle for her talents.  Excellent, witty script where even the minor characters (her parents, her best friend) are interesting. I knew I wouldn’t like this movie, based on a scathing review I read when it was first released, but, hey, it was on Netflix, and I was curious to see how bad it could be, given its all-star cast (Jodie Foster, Kate Winslet, Christoph Waltz, and John C. Reilly) and director (Roman Polanski).

Well, I finished watching it, but only just barely – I thought about turning it off several times mid-movie.  The story was adapted from a play and is about two couples whose meeting over a fight between their sons quickly descends from stilted courtesy to yelling and hysterics.  The whole thing unfolds in the living room of one of the couples, mainly because at every reasonable opportunity to end the increasingly useless meeting, the characters decide to keep talking.  I might have forgiven that narrative device, if the dialogue had felt more real and if there were more interesting revelations about the characters. 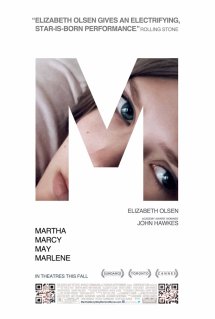 This is an independent film which made a splash at the Sundance Festival and won accolades for its star, Elizabeth Olsen (sister of the famous twins).

A young woman, Martha (Olsen), escapes from a cult and is taken in by her estranged older sister, Lucy (Sarah Paulson).  As Lucy tries to understand the strange behaviour and haunted manner of her uncommunicative sister, the story is told in flashbacks to Martha’s time with the cult, cutting back to her awkward adjustment to Lucy’s upper-middle-class lifestyle.

I thought the film did a good job of first showing some unsavory aspects of the cult (living in poverty, women being totally subservient to the men) and then showing why it might have appealed to a lost soul like Martha.  Elizabeth Olsen is a very natural actor, but I wasn’t blown away, since haunted/crazy isn’t generally that hard to do.

This movie was building up to a 3-star rating, until it suddenly ended without any kind of resolution.  When stories end like that, it always makes me suspect that the writer could not figure out a good ending and so decided to leave it up to the audience to figure one out for themselves.  There are rare instances when the story is actually better served by an ambiguous ending, but most of the time (as in this one) it just feels like laziness.

Charlize Theron stars as Mavis, a former high school mean-girl who goes back to her hometown with the misguided plan to “free” her high-school flame from his current wife and baby.

The film presents Mavis as the ultimate loser in her adult life – ashamed of her job as a ghost-writer, divorced, lacking real friends, slovenly, emotionally immature, and yet still wanting everyone to be envious of her.  It also sets her up as an object of ridicule, instead of trying to explain or explore why she turned out this way.  Even her parents are presented as nice people who are taken aback and saddened by her bad behaviour.

The whole film felt like rather gratuitous wish-fulfillment made for (and by?) people wanting revenge on their high school tormentors.

This TIFF entry is a French-language animated 3-D musical comedy based on a French manga (IIRC).  The story is about a family that runs a shop specializing in poisons, nooses, weapons and other means of committing suicide, and about what happens when a boy with an incongruously sunny disposition is born into the family.

The film was made with obvious love and attention to detail (the English subtitles for the songs were done in rhyme), but the story is ultimately too thin and predictable to provide enough interest.  The black humour was essentially one joke told over and over (a customer matter-of-factly choosing suicide and a shopkeeper helpfully providing him with the means). Starring Jennifer Lawrence in a break-out, Oscar-nominated performance, this well-paced, hyper-realistic film follows Ree, a teenager left in charge of her impoverished family, as she tries desperately to find her drug-dealing father.

This film was adapted from a novel and its depiction of hard-scrabble life in the Ozarks feels real.  Ree is tough and shrewd, but she’s still young and not sure of the rules that the other characters play by, which makes each encounter suspenseful.  As a viewer, I really felt that I had been immersed into a foreign world.

Jennifer Lawrence, as Ree, appears in virtually every frame and is riveting.  You can see why the producers of The Hunger Games saw Katniss in her – actually the characters have a lot of similarities – but this performance is the one that really shows off her talent.

Midnight’s Children is based on a celebrated book (which I have not read) by Salman Rushdie, who also adapted the story for the screen.  The story is about a group of children, born at the stroke of midnight on the eve of India’s independence, who possess magical powers, and whose lives parallel that of the fledging nation.  Apparently, the book has famously been considered too difficult to adapt to the screen, and now I know why.

The movie suffers from a surfeit of story threads, so many that there is simply no time to fully develop or finish any one.  Ruthless editing at the screenplay level would have benefited this film  immensely.  For example, some characters (even entire generations) could have been eliminated or at least amalgamated with the same narrative effect.  Better movie editing would have helped too, as some gaps and disjointedness in the storyline could have been easily remedied if the filmmakers had tried.  It’s odd that some scenes are shot with such charm and attention to detail and yet some storylines are just left hanging.  I do wonder if budget or time constraints forced this movie to be released before it was really ready for an audience.

You could see the potential for a good movie (at least a 3 star movie) in there, but, as it is, it felt unfinished and unsatisfying.