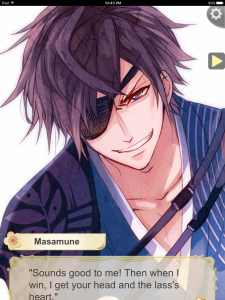 From November the 12th to the 26th, CYBIRD’s Ikemen Sengoku mobile game hosted the Dueling Hearts Story Event, which saw warlord pitted against warlord in 3-part stories. Now that it’s over, I think it should be safe to reminisce and to talk about it. By grinding the Glam Offs, and with more than a little help from some great friends on- and off-line, I was able to complete all 5 Premium endings as well as 2 of the Sweet endings.

Probably the most straightforward duel was the one between my 2 best guys, Masamune VS Shingen. Just having come off of Masamune’s route in the main story, I was in the perfect mindset to feel loyal and faithful to him, yet tempted by the charms of Shingen.

I chose Masamune’s (Premium) ending first and actually found it a bit boring! Partly, that was because the compliments that the MC gave him felt insincere. I wished Masamune hadn’t worded the question in terms of coolness, since it seemed clear to me that Shingen’s smart and measured approach to fighting was cooler, not to mention his ability to read the situation from someone else’s point of view.

I did enjoy Shingen’s (Sweet) ending, which I took the second time around. (Full disclosure: It may be obvious already, but I am very biased. I like Shingen a lot.) In it, he and the MC got to spend a few hours together. They ruminated on what might have been if things had happened differently. It was really more bittersweet than sweet and it just hit me in the feels. 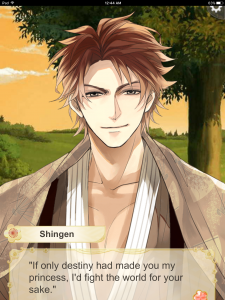 Regrettably, I didn’t take any screencaps of the Nobunaga VS Kennyo route. It was pretty interesting and shed light on Kennyo as a kind and decent person, you know, other than that revenge obsession. 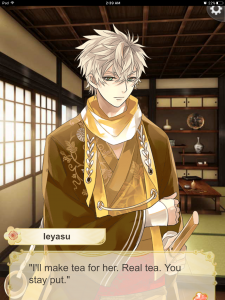 From the anime, I know that Mitsunari is an Ieyasu fanboy, while Ieyasu treats him coldly in return. There hasn’t been much interaction between them in the main stories so far, at least as far as I’ve gotten. In Ieyasu VS Mitsunari, we finally got some explanation as to why they feel the way they do about each other, as their contrasting methods were applied in a duel to see who would be strongest. 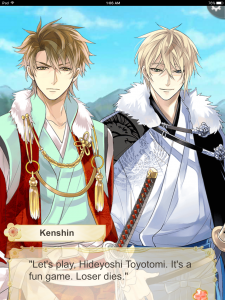 Hideyoshi VS Kenshin played up the warlords’ respective personalities and was surprisingly funny. Kenshin’s pretty much a single-minded, cold-blooded thug; and I’m not saying he’d be good boyfriend material or anything, but I quite liked him in this route because he was so well-written. 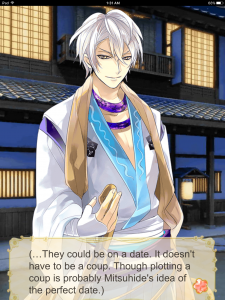 The Yukimura VS Mitsuhide route was probably the most dramatic, what with the espionage and covert operations and fighting on a rooftop in gale force winds. In both endings, things escalated pretty quickly on the romance front as well. I didn’t get to follow Mitsuhide’s (Sweet) ending personally, but I have it on good authority that it included a near marriage proposal! And in Yukimura’s (Premium) ending, this:

An immortal warrior named Manji joins forces with a girl who is out to avenge her murdered family in director Miike Takashi’s 100th film.

I enjoyed the humour that was in the movie, although I personally thought there could have been more of it. Some of the quieter scenes dragged on a bit too, which needlessly slowed the pace in several parts.

But, as far as grand sword fighting spectacles go, BLADE OF THE IMMORTAL delivered what it promised. The body count was astoundingly high. So lots of good fun, in other words.

Rin, the lead girl, was pretty useless though! If she was supposed to be nothing more than a damsel in distress, they should have just made her that. Instead, I got the impression she was one of the better students at her father’s dojo. And she trained for her revenge every day with Manji, only to end up utterly incapable of defending herself! I have to conclude that probably the villain was right when he dismissed her father’s abilities; maybe he (and his sword style) really did suck.