This western-actioner is pretty much what one would expect from a Quentin Tarantino film.  It manages to be smart and dumb at the same time and there’s no skimping on gore.  It takes place in the American deep south a couple of years before the Civil War.  Like LINCOLN, it covers the topic of slavery, although the 2 films couldn’t be more different in terms of presentation and tone.

Christoph Waltz and Jamie Foxx deliver strong performances in their roles of dentist-turned-bounty hunter Dr. King Schultz and his eventual partner, slave-turned-bounty hunter Django.  Django’s ultimate goal is to rescue his wife Broomhilda from the Candieland plantation, but there’s a lot of character- and plot-development enroute.

DJANGO UNCHAINED is brutally violent, with copious amounts especially toward the end.  Fortunately, it is frequently amusing too.  Just one example: a pre-raid meeting held by the white supremacists in which they air their grievances about the headgear they are supposed to wear.

Going in, the running time of nearly 3 hours gave me pause, but ultimately, the movie didn’t end up feeling too long.

(On a side note, seeing Dr. Schultz’s cute horse made me nostalgic for another cute horse: Comet, from The Adventures of Brisco County Jr.) 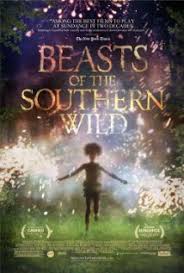 I can’t write about this movie without revealing major spoilers, so be forewarned.

This movie didn’t go where I expected it to go, and the direction it took is not entirely satisfying but did make me think.

It starts out as a survival story about a six-year-old girl, just abandoned by her alcoholic father in an isolated and impoverished community on an island outside of the levees that keep the rest of civilization dry and safe.  The film is intentionally opaque about whether this is meant to be modern times, outside of New Orleans, circa Katrina, or whether this is meant to be a post-apocalyptic time in the near future (I guessed the latter, at first).  They show how this community has developed its own culture which values toughness and celebrates what little they have, and how the little girl has internalized those lessons.

At this point, it is hinted that they would be captured and put into camps if they ever dared to venture behind the levees, so they are essentially trapped in the flooded wilderness.  It was harrowing to watch the girl try to fend for herself, and even when her father returns, they continue to suffer as another hurricane batters and floods their island.  I kept hoping for some happy ending that would see the girl finally safe and well-cared for, despite the fact that things looked like they were going from bad to worse.

Then, they are visited by rescue workers who bring them and their neighbours, against their will, to a refugee camp where they are given food, clothing, medicine, and schooling.  But they (with their neighbours) plot an escape back to their island.  Huh?

Up to this point, at particularly lonely times, the girl would heartbreakingly cry out for her mother, who abandoned her as a baby.  So, after returning to their bleak makeshift home and finding out that her father is dying of an unspecified disease, she sets out on a raft, and somewhat miraculously finds someone who seems to be her mother.  This woman even offers to let her stay with her.  But she chooses to go back the island.  Huh?

The ending was a bit of a non-ending, actually, in that the girl simply continues to struggle on, just as she did in the beginning of the movie, but now, she has chosen this path.

So basically, this movie ends up being a chronicle of one alternative lifestyle, where people choose poverty and danger when safety and resources are close at hand.  I feel that using the term “alternative” is already being generous, because what reasonable person would choose this?  Not to mention the ethics of choosing it for your child.  I could see that the filmmaker was trying to frame the ending as a celebration of embracing the life you already have.  I just wasn’t entirely convinced, and started to feel less and less sorry for these people as the movie went on.  And that’s kind of the point of the movie too:  this little girl doesn’t want your pity.

I have a pretty open mind when it comes to popular fiction, so I decided to check out this book.  Not really a review, I’ll just write my thoughts as I go.  I’ll try to keep spoilers to a minimum for anyone who hasn’t read it.  I don’t think it’s a spoiler to say that this novel contains pornographic smut, though.  That’s something you should be aware of if you are thinking of picking it up. (Edit: In retrospect, it occurs to me that not everyone will agree with my interpretation of what is and what isn’t a spoiler regarding the events in this story; therefore, be warned.)

So far, I can’t say I’m that impressed with the love interest, title character Christian Grey.  Besides his minimal personality traits of being controlling and mysterious, he’s kinda creepy, isn’t he?  Kinda reminds me of Christian Bale’s Patrick Bateman character from AMERICAN PSYCHO.  Even in the early scene in the hardware store, I could tell what he was getting at with his purchases, and I thought it was creepy.  I mean, he and Anastasia hardly know each other, and here he is stalking her and vaguely suggesting that he’s thinking about her sexually.  The only thing that makes it okay is that he’s so freaking hot and she happens to be attracted to him too.  Had he not been so hot, it would have just been gross, and creepy.

As it is, she doesn’t really know much about him, other than that he’s so hot.  This being a book, I just have to literally take the author’s word for it that he’s so hot that nothing else matters, and I’m frankly not that convinced.  Actually, neither of the characters has much personality so far.  It seems like any chemistry they have is purely physical.

It isn’t all bad, though.  Aside from some overused plot devices that I see in anime twice a week, it’s been an easy read and there have certainly been some amusing parts.

Well, I’m relieved to see that Anastasia is asserting herself a little bit now.  I also like how her subconscious sometimes calls her a “ho”.  It appears that she does have some self-awareness about her situation and she’s wondering if a physical-only relationship can really be enough.

Hmm, it looks like she’s going to accept the contract that’s going to sign her freedom and self-respect away.  I was hoping she would reject it.  Force him to play by her rules.  After all, the conceit is supposed to be that she believes (and he believes) that he’s not capable of love, and so this contract is the only way she can be with him.  But already I don’t buy it; there has been plenty of evidence to the contrary.

In previous chapters, they touched on “creepy” and “stalker”.  Now there’s finally some mention of “love”.  Otherwise, not much development here.

Chapters 25 to 26 and final impressions

Anastasia makes her decision and it happens pretty suddenly.  Well, as anyone knows, it’s not really the end.  There are two more books, and their blurbs seem to give a lot away, actually.

Apparently, some readers have complained about the author’s limited vocabulary.  That didn’t really bother me.  I didn’t expect, or want, this kind of book to be high art.  If I have any criticism, it’s with the dialogue; some of the words/phrases that the characters spoke didn’t sound that natural to me, not American enough, maybe?  Just reading it (as opposed to hearing it) wasn’t too bad, though.